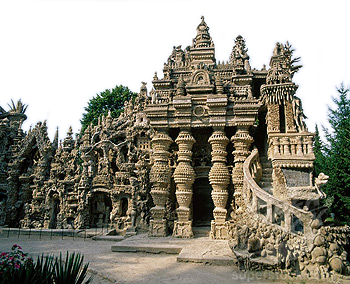 EAGERNESS: In 1879 a 43 year old postman walked around Drôme in the southeastern France. His hobby was to collect nice stones from the gravel roads and put them in his pockets.

After a while he began to put the stones on top of each other and attached them with lime and mortar.

Every route he walked with the mail he would collect stones. One by one.

At a point some of the neighbors started to complain about his new hobby. They thought it was weird and asked him to stop. But he convinced them otherwise and kept collecting the stones.

After 34 years his work was completed. Le Palais Idéal. A castle built of small rocks and stones, collected and built by a postman. Le Palais Idéal still stands today and is the local community’s big attraction.

The reason that this is such an interesting story to us. Is because it shows exactly what a little daily deed every day can create over time.

What potentials could be found within the human capacities in Denmark? What potentials have the people feeling stigmatized or neglected – young as well as old?

What kind of beautiful creations could we created today – metaphorically speaking – by steadily and slowly putting one stone on top of another one  by one, as Cheval did more than 100 years ago?