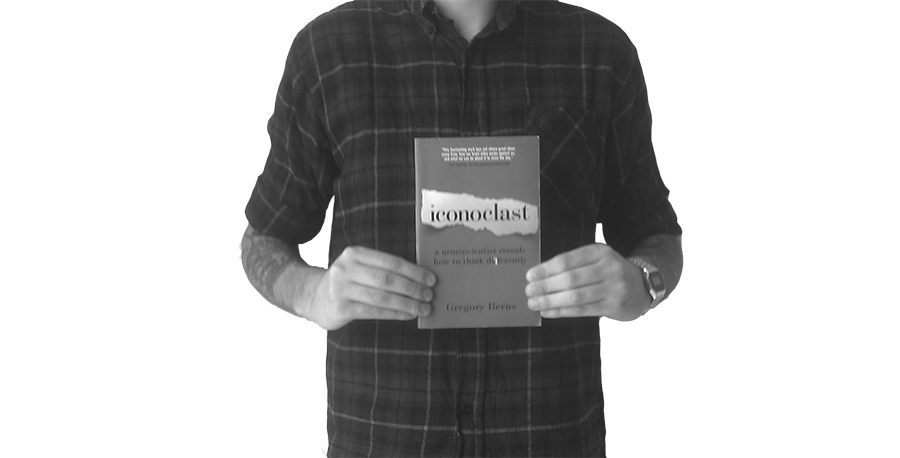 If I recall correctly, it was in a world history class in an elementary school in Chicago when I first became aware of the word “iconoclast” while reading about an Athenian political and military leader, Alcibiades (5th century BC), whose enemies charged him with sacrilege after seamen under his command became drunk while ashore and roamed the streets, smashing statues of various deities and dignitaries. Curious, I recently checked the Online Etymological Dictionary and learned that an iconoclast is a “breaker or destroyer of images” from the Late Greek word eikonoklastes. Centuries later, an iconoclast was viewed as “one who attacks orthodox beliefs or institutions.” This brief background helps to introduce Gregory Berns’s book in which he examines a number of people who in recent years accomplished what others claimed could not be done. When doing so, these modern iconoclasts attacked orthodox beliefs and, in some cases, institutions. “The overarching theme of this book is that iconoclasts are able to do things that others say can’t be done, because iconoclasts perceive things differently than other people.” Berns goes on to explain that the difference in perception “plays out in the initial stages of an idea. It plays out in how their manage their fears, and it manifests in how they pitch their ideas to the masses of noniconoclasts. It is an exceedingly rare individual who possesses all three of these traits.”

I was already somewhat familiar with several of the exemplars discussed in this book but not with others. They include Solomon Asch, Warren Buffett, Nolan Bushnell, Dale Chihuly, Ray Croc, Walt Disney, David Dreman, Richard Feynman, Henry Ford, Steve Jobs, Martin Luther King, Jr., Paul Lauterbur, Jim Lavoi, Stanley Milgram, Florence Nightingale, Branch Rickey, Burt Rutan, and Jonas Salk. According to Berns, these iconoclasts possess a brain that differs from other people’s in three functions (i.e. perception, fear response, and social intelligence) and the circuits that implement them. Keep in mind, however, as noted earlier: “It is an exceedingly rare individual who possesses all three of these traits.” Howard Armstrong, for example, was “the most iconoclastic and influential engineer of radio” whose inventions include FM. “But what is most interesting about Armstrong is the extent of his iconoclasm,” so extreme that it “advanced radio technology but cost him his life.” Berns’s discussion of Armstrong (Pages 1-4, 9-10, 129, 131, and 151) explains why his story “is a cautionary tale” to those about to challenge conventional wisdom.

Berns makes an important distinction. “The iconoclast doesn’t literally see things differently than other people. More precisely, he [begin italics] perceives [end italics] things differently. There are several different routes to forcing the brain out of its lazy mode of perception, but the theme linking these methods depends on the element of surprise. The brain must be provided with something that it has never processed before to force it out of predictable perceptions. When Chihuly lost an eye, his brain was forced to reinterpret visual stimuli in a new way.” In this context, I am reminded that only after Sophocles’ Oedipus gouged out his eyes and Shakespeare’s Lear wandered sightless on the moors did these two monarchs perceive the realities that, previously, their vision had denied or did not see.

No brief commentary such as this can possibly do full justice to the scope and depth of this brilliant book but I can at least suggest a few of the subjects that were of greatest interest to me:

1. How the brain receives, processes, and assimilates what is perceived
2. Given that, how and why people then manage their fears and people pitch their ideas to the masses differently
3. The relationship between imagination and the visual system
4. Why the brain can sometimes be “too efficient”
5. How the networks that govern perception and imagination can be reprogrammed
6. How fear can distort perception
7. Why an iconoclast’s familiarity and reputation figure prominently in her or his success
8. The five attributes of innovation and their relevance to the iconoclast
9. How and why a few iconoclasts become icons
10. Why any/all of the three functions of the brain can “go awry” and how to correct the dysfunctionality

As I read the final chapter, “When Iconoclast Becomes Icon,” I was reminded of Henry Chesbrough’s insights concerning the open business model and his emphasis on the importance of developing an open mindset, one that is receptive to a variety of different points of view, and of Roger Martin’s discussion of what he calls the “opposable” mind that is capable of considering contradictory ideas while making especially difficult decisions. I was also reminded of what Noel Tichy and Warren Bennis suggest in Judgment when asserting that effective CEOs “not only make better calls, but they are able to discern the really important ones and get a higher percentage of them right. They are better at a whole process that runs from seeing the need for a call, to framing issues, to figuring out what is critical, to mobilizing and energizing the troops.” What Berns offers in this volume is a brilliant explanation of the neurological foundation for precisely what Chesbrough and Martin as well as Tichy and Bennis believe are common characteristics of a great leader. “For the iconoclast to become an icon,” Kerns observes, “not only must he possess an especially plastic brain that can see things differently, but he must rewire the brains of a vast number of other people who are not iconoclasts.”

This is not an “easy read.” On the contrary, before beginning to compose my review, I re-read the book with special attention to the dozens of passages I had highlighted. To his great credit, and to the extent possible, Berns presents scientific material in layman’s terms for those such as I who have little (if any) prior knowledge about neuroscience and especially about what the brain is, what it does, why people can perceive the same objects so differently, how and why people can respond so differently to fear, and why there are such significant differences between and among people in terms of their social skills. Because iconoclasts perceive the world differently, they have a different context in which to formulate their mindsets and world views, determine preferences, select objectives, and mobilize resources (including collaborators) when pursuing those objectives. Unlike Alcibiades’seamen who seem to be nothing more than drunken vandals, the contemporary iconoclasts of greatest interest to Berns are those who are visionaries, builders, and in some instances revolutionaries. His frequent use of the word “epiphany” is apt. Several of those whom he discusses experienced a “shock of recognition” that revealed both a profound insight and a compelling vision. Disney’s epiphany occurred when images of a static cartoon projected on a movie screen changed his “categorization of drawing from one of static cartoons to that of moving ones – drawings that told stories in a narrative sense.”

Presumably there will be many differences between and among those who read this book in terms of what they learn and how they then apply what they learn. Perhaps at least some of them are “regular” iconoclasts and a “precious few” among them are or will one day become icons such as Jonas Salk and Steve Jobs. As for the rest of us, none may ever “shatter conventional thinking” but, thanks to Gregory Burns, we will at least be much better prepared to understand, appreciate and support those who do.

By Robert Morris. From Amazon.